It is numbers that don´t lie, do they? The tool of measuring to testimony facts and conditions has thoroughly permeated our habit of perception. Be it ratings or rankings, surveys, your succession rate in life and job or the simplicity of your own body functions, everything can be benchmarked by means of enhancement and refinement. The strategies of surveying systematic connections within the art world, using empirical models and data hovering between reality and idealism, make up the intersection of specific works by Jonas Lund (*1984 Sweden) and Timm Ulrichs (*1940 Germany). Their works differently remind you of the outcome, when one trades his/her autonomy for the authority of digits. For the first time, Patrick C. Haas and Jonas Schenk alias MÉLANGE brought the works of those to artists together at PiK Cologne last year.

Timm Ulrichs looks back on a very diverse oeuvre and his accomplishments for the arts cannot be summarised here. Retrospectives such as in 2010 at the Sprengel Museum Hannover, demonstrate Ulrichs importance for a younger history of art going from the 1960s until today in Germany. Early on, he aimed to exhibit the artist´s life in each possible facet by mainly using his own body. 1965 he exhibits himself as the first living artwork in a glass case, referring to the changing role of the artist within the art world, what could be seen as a prototype for 1970s institutional critique. By presenting and interpreting the human existence in its permanence in all aspects of life, his works evoke a kind of hyperrealism, which anticipated nowadays use of self-images and self-perception which have become a commonplace today (social media, quantified-self, etc.) His body becomes the surfaces of a radical endpoint, beyond which nothing can come. The literalness in many of this works such as the tattooing of “THE END” (1981) on his right eyelid or “A ≠ a. Widerlegung des Identitätsprinzips” often contain very ironic refractions. In the 1970s, particular works are devoted to scientific surveying and documentation, most of which are on display in his show, for example the measurement of his skin, an endoscopic journey through his body or having himself observed by a private detective a whole day. Ulrich’s empiricism shows quite clearly how dubious it is to derive an ideal from statistical reality whose sole purpose is the evaluation and classification of the individual.

While Ulrichs thus essentially addresses the analogous reality of the artist’s body, Jonas Lund investigates the reality of artworks that increasingly turn to the ongoing race for attention, value and growth, while being affected from processes of optimisation. His works deal with the distribution mechanisms and associated production and marketing strategies of works of art. In the last six years he has analysed and subsequently imitated the inflation role of artworks (especially painting) in the context of market-driven sales models. Forced by the constant pressure for artistic creation, Lund has continued to refine his production processes by outsourcing and having it done by third hand. For this, he created a pattern of programs designed to over the creative thinking process. The analysis of sites such as Artrank or Artsy was preceded by the question of how and if the successful work of art could be created, which´s solely goal is to accumulate value. The three large-format canvases from the “Studio Practice” exhibition (2014) are among four of the last remaining 93 works which were produced. Lund hired assistants whose job it was to produce process-based paintings based on a 300-page manual, while their work was able to be watched via live-streaming. Upon completion, a jury of artists, gallerists, collectors and art advisors judged the quality of the paintings, whether they should be destroyed or signed by Lund. In the end, only four works were allowed to be signed. Hype Cycle (2016) for example is an intelligent video work that constantly updates itself to follow the latest hype in the arts, economics and technology. Pictures, texts and videos are filtered from a number of online sources and mixed with already defined material so that they can work independently.
Last year, Lund worked on the aspect of user feedback and the empowerment of the visitor to actively interact with the exhibition. By means of a feedback loop, the user’s contribution should in turn be harnessed for one’s own value process. Giving the opportunity to give ones vote for the artworks of ones liking, the viewer can decide between the works by Jonas Lund (blue) and Timm Ulrichs (red). Adopting the dominant color of the U.S. election campaign, the social aspect of voting is being reduced to pushing random buttons – as many times as you want. But still, the result decides on the whereabouts of the works – the most chosen determined by “Your Opinion Matters” wins, as week by week the losers will be deinstalled.
So please, go vote! 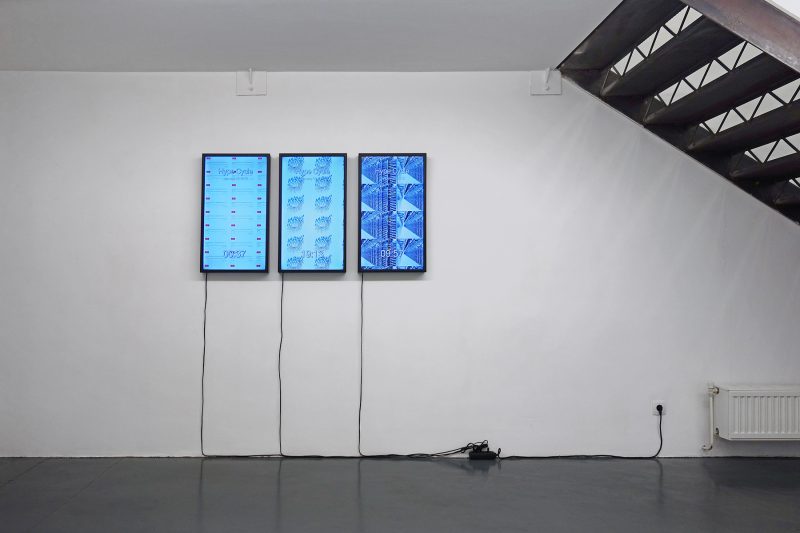 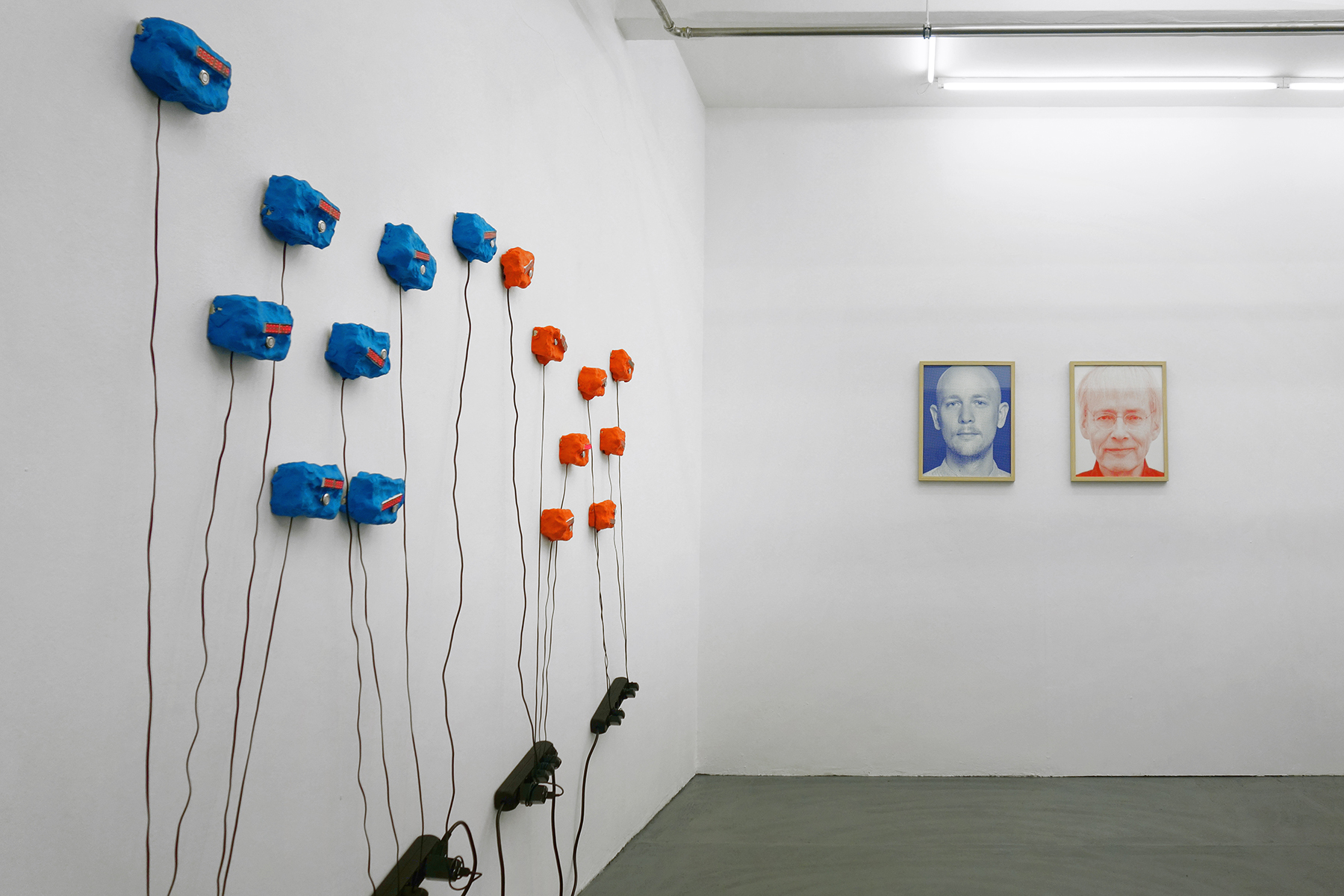 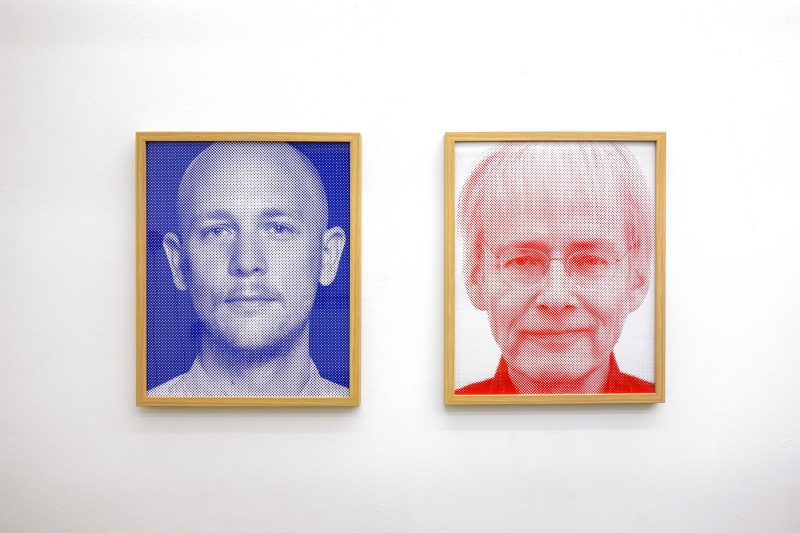 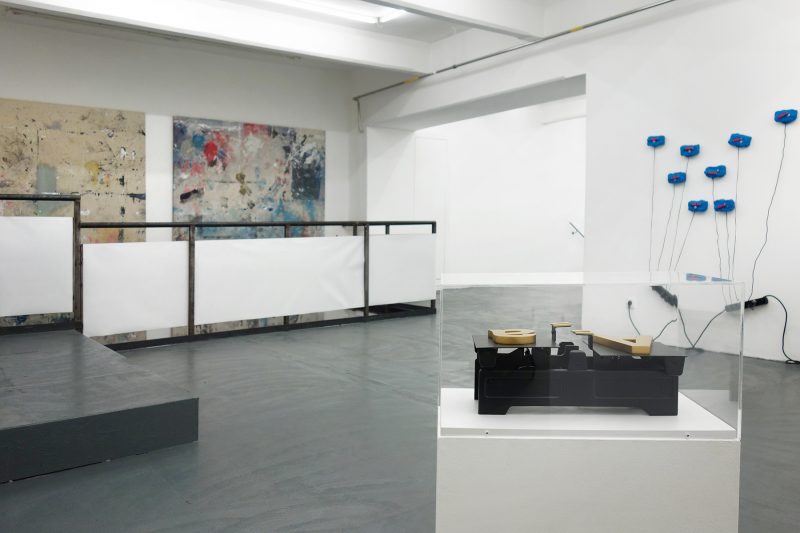